Parashurama was an Avatar of Vishnu.

It is a rare occasion when one Avatar of  Vishnu comes face to face with another.

If my memory is correct, this is the only Avatar where one Avatar of Vishnu met another.

Parashurama met Lord Rama, who is also an Avatar of Vishnu met Ram after His marriage with Sita, while he was on His way to Ayodhya. 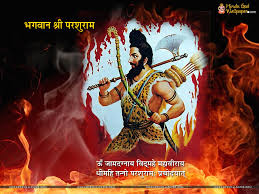 Parashurama was a Man who vowed to wipe out Kshatriyas for 21 Generations for Karthaviryaarjuna, a Kshatriya having killed His father Jamadagni.

He was more angry at Rama for Rama had broken the Bow, Shiva Dhanus at Sita’s Swayamwar, which was given by Him to Janaka, Foster Father of Sita.

He challenged Ram and Ram strung the Bow and asked Parashuram as to what would be the Target he would assign for The Arrow.