Infographic: What Is The Biggest Mistake Leaders Make When Working with Others? 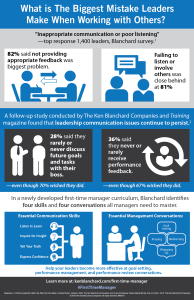 When The Ken Blanchard Companies asked 1,400 people the question “What is the biggest mistake leaders make when working with others?” 41 percent of respondents identified inappropriate communication or poor listening.

When these same respondents were asked to look at a list of common mistakes and choose the five biggest missteps by leaders, two responses stood out.

Not providing appropriate feedback was chosen by 82 percent of respondents. Failing to listen or involve others came in a close second, cited by 81 percent. (Failing to use an appropriate leadership style, failing to set clear goals and objectives, and failing to develop their people rounded out the respondents’ top five of things leaders most often fail to do when working with others.)

A 700-person follow-up study conducted by Blanchard in 2013 with readers of Training magazine found similar results. In that survey: